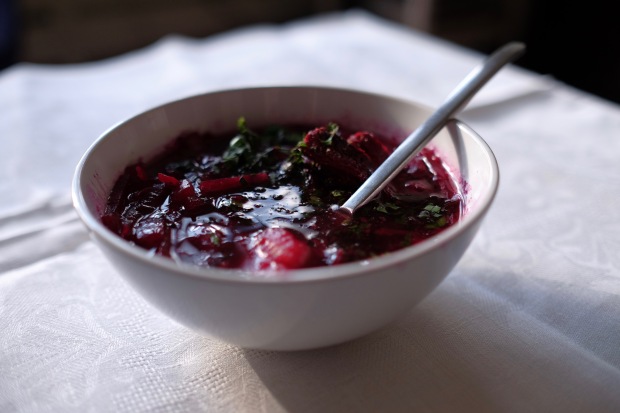 Barszcz is borscht.  And borscht is борщ.  And probably some other names.  We are going with barszcz here.   You got me?

Now the history of barszcz is deep and complex.  And that is how it should taste, even if it’s simple.  I’m sure someone will write a book about it’s interesting evolution and history, and I will read it.  If there is a book out there, correct me please!  Apparently first made with fermented hogweed (a common plant) in Poland, it eventually was just sour things.  But basically the beet was not introduced to this so called barszcz for a long time.  There are still others types of barszcz, most commonly in Poland is white with a fermented rye starter and white sausage.  I have also heard of green barszcz and each country and region has slightly differently additions.

I have been thinking about making barszcz all winter.  I have an awesome cold barszcz recipe here.  The kind I made below is a winter soup to me, it’s rich and hearty.  Polish barszcz is a clear broth most of the time, but I like having some more substance, something like the Ukrainian’s do but still simple.

Mine starts with a zakwas.  Which is kvass, which is also квас.  Zakwas is a fermented juice/liquid.  It can be also made with bread, which usually you make white barszcz from.  I also added bread to my beet kwas to help it ferment.  Here is how I made mine. 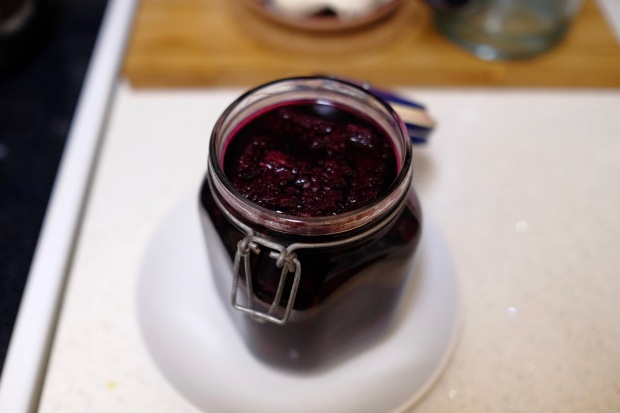 a couple of fresh small beets, skin on

a couple of garlic cloves

1 liter jar with a lid

– make sure your jar is cleaned really well!

– chop off the ends of the beets.  wash them really well with a scrubber.  chop them into small pieces, leaving the skin on.

– mix 1 tbsp of sea salt with the water until evaporated.  place the beets in the jar, pour the water on top.  crush your garlic cloves and place in the jar.  cover it and shake it around a bit to mix everything.  you want to make sure the beets are fully submerged.  remove the lid and add more water if needed.  place the stale bread on top, also making sure it is covered with water.  if you don’t have bread that is ok, it might just take longer to get fermented.

– let the beets sit 1-2 weeks.  if your lid is very tight, open it once a day to release pressure and check for mold.  the jar I used is pretty loose so I don’t do it every day, maybe every other.  if there is mold best to not risk it so throw it out.

(also you can just drink this for health!)

juice of half a lemon

– place the short ribs in a large pot. cut the onion in half and place half of it in the pot along with the carrot, peppercorns and bay leaves. cover everything with 4 cups of water, a little more if not covered all the way. bring to a boil and then simmer on low heat covered for an hour.

– meanwhile peel the beets and chop them into match stick size pieces. dice the potatoes into big chunks and set aside (you can do skin on of off, I don’t mind it on).

– cut the other half of the onion into thin half moons. heat the oil in a skillet on medium heat. cook the onions on medium low, slowly until they start to turn soft and lightly brown, then add the garlic. cook about 8-10 more minutes. set aside.

– once the meat has cooked for an hour and softened, remove the carrot and onion. either strain the broth and place the liquid and meat back in or try and pick out the peppercorns and bay leafs with tongs and a spoon. add the beets and potatoes and simmer covered for another 30-45 minutes until the beets and potatoes have cooked.

– add the onions. add the beet zakwas and lemon juice and stir well. you can take out the meat to serve and chop the more meaty parts into small pieces, it’s quite fatty usually and hard to leave in the soup whole.

View all posts by juliaradish