I have been so lazy lately.  But seriously, I am not sure what is going on.  There are two possibilities I can fathom, allergies or the end of summer just makes us lazy. Here’s to being lazy!

So lazy noodles is a thing in Polish cooking.  Who doesn’t love lazy cooking.  We need more recipes like this in life.  They are also sometimes called lazy pierogi or lazy kopitka (which means little hooves and is another dish that uses potato instead – but I guess the lazy way is like this with cheese).  It seemed like the best thing to make since I’m lazy, and because it’s actually really good.  They are similar to gnocchi, using cheese and flour to make little dumplings.  But they are a bit more sloppy and lazy perhaps.  Pesto is also a bit of a lazy choice in my opinion, plus the basil you can get now!  Lazy noodles are often just served with browned butter breadcrumbs, little bacon bits or just sugar and butter.  But really they can be served with many other sauces, but just remember – keep it lazy.

Also I don’t do the whole pine nut pesto thing, in America pine nuts cost an arm and a leg, and I like my limbs thank you very much.  It’s walnuts for me.

This version of lazy noodles I made is not the laziest.  The laziest would be to just take some farmer’s cheese and mix in an egg and then just add flour until you get the consistency you need.   I wanted mine to be extra good so I went for the slightly less lazy version where you beat egg whites and soften butter and all that jazz. The lazy part is that you don’t have to knead. 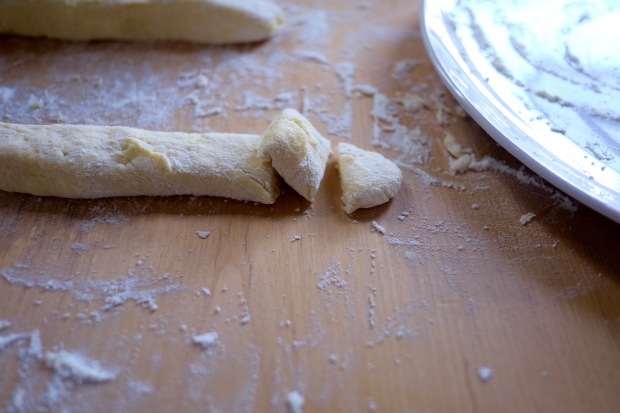 1 1/3 cup all purpose flour (plus more for shaping)

juice of half 1 lemon

-fill a large pot with salted water and set to boil.

– Make the pesto by mixing the basil, oil, walnuts, olive oil, cheese, garlic and lemon in a food processor.  Don’t over blend it, just pulse until it’s all blended nicely into a paste/sauce type texture.  Season and pulse a couple more times.  Set aside until the noodles are done.

– Beat the egg whites until soft peaks form and set aside.  Mix the egg yolks with the softened butter.   Mix the farmer’s cheese with the yolks and butter and add salt.  Gently fold in the egg whites.  Fold in the flour in small batches and mix well.

– Flour your work surface well.  The dough will be very sticky so use a bunch of flour and don’t overwork it.  Divide the dough into four parts.  Take one part and gently form it into a long thin tube shape. Use your fingers to pinch and form it then roll it back and forth the make it longer.  You can make it as thin as you want but not too extreme, then cut it into even pieces and place on a floured plate or cutting board.